Tourism is expected to be extremely positive this year. After the adventure of the pandemic that hit tourism worldwide, recovery is what is needed. Our aim is to quickly exceed, if not this year, which is the best year of Greek tourism to date, the year 2019.

Thessaloniki has all the prerequisites to record a positive year as the first signs are already encouraging. Significant investments have been made in recent years – we see the opening of many high standard hotels, the significant interest in real estate with the creation of short-term accommodation and great renovation activity.

At the same time, cruises in the port of Thessaloniki have increased by 250% this year compared to last year, with the confirmed cruise ship arrivals exceeding 60 of last year’s 17. Thessaloniki’s port is included in the list of home ports, and this makes us extremely optimistic about the future as it creates great prospects for even more arrivals. Equally important is also the ferry connection of Thessaloniki with the Aegean islands and with the city of Izmir, a development that contributes to the city’s promotion as a transport and tourist hub in the wider area.

Thessaloniki Airport “Makedonia”, with upgraded facilities and more connections to cities abroad, is already visited by more people and can support increased tourist traffic with evident benefits for northern Greece.

Apart from the aforementioned, however, there are positive developments that concern the city itself, making it a must-see tourist destination. With UNESCO’s stamp, Thessaloniki has emerged as Greece’s gastronomic capital, being the only Greek city that joined the UNESCO Creative Cities Network in gastronomy. What we, the residents of Thessaloniki, have already known – that we have excellent cuisine, excellent raw materials, cooking skills and knowledge of good food – we want everyone to know. The city has all the guarantees to be established as a model gastronomic destination, recognizable worldwide, offering Greek and foreign visitors authentic and quality products, aromas, and flavors.

For the first time, Thessaloniki has also taken its place on the Christmas holidays map – a market that the city had never targeted and never had claimed a share of until 2019. With new ambitious decorations, events, Christmas markets, art projects, and synergies with all the city’s institutions, we have managed to attract visitors throughout the winter season.

A further important element for Thessaloniki is that throughout this period, we – as the Municipality of Thessaloniki – participate in all national tourism promotion efforts. As part of the great alliance with the Prefecture of Central Macedonia and the Ministry of Tourism, we make a decisive contribution to the advertising and promotion of the city with initiatives in major capital cities abroad, while campaigning on the internet as well.

Simultaneously, however, Thessaloniki is a changing city. Its urban environment is being upgraded through extensive renovations. Its transformation into a smart city, with the aim of becoming more friendly to residents and visitors, is progressing. Major infrastructure projects are being completed and others are being planned. Projects that will improve the mobility, access, commerciality of large areas. Flagship interventions in its historic center such as the new Aristotelous Square, the open food markets and the squares will soon have a new, more attractive image.

Therefore, together with all of Thessaloniki’s great points – the climate, the sea, the hospitable people, the history, the museums, the city’s monuments, its creative richness, the high-level services – we can provide visitors with a variety of options as a modern urban European center that is, in fact, adjacent to remarkable tourist destinations that satisfy all possible desires and preferences. 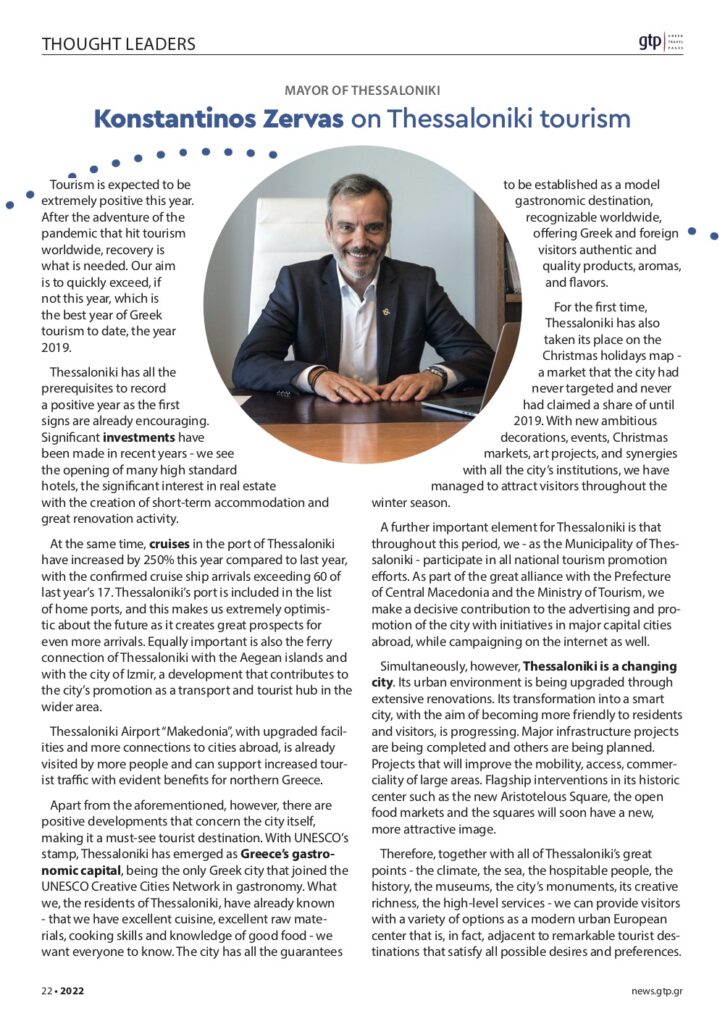